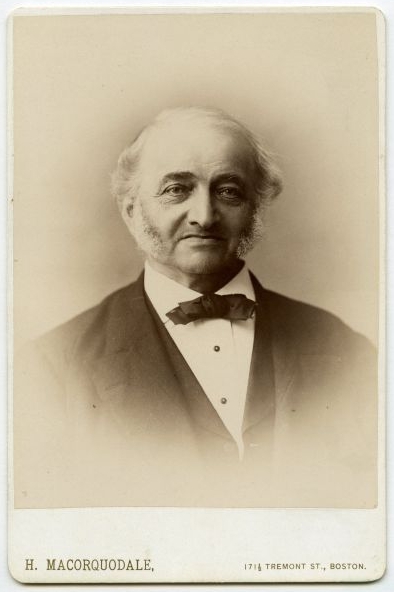 This collection contains a selection of letters written to Jacob Norton (1814-1897). Norton, a Polish Jew who immigrated to England, was a furrier by trade. He was raised to the degree of Master Mason in Lodge of Joppa, No. 188 (London, England) on August 5th, 1839.

Norton took his business to the United States, and in 1842, demitted from Joppa Lodge. In 1844, after taking up residence in Boston, Massachusetts, Norton joined St. Andrew’s Lodge, and was made a member on November 14th. He remained a member of this lodge for almost eight years until his petition to the Grand Lodge of Massachusetts for the revision of its ritual and removal of overt Christian allusions was denied in June 1852. The committee members who denied this petition also recommended that he and the other petitioners had to withdraw from St. Andrew’s. He subsequently resigned from St. Andrew’s Lodge and became increasingly discontent with American Freemasonry, writing critical articles until his death. Due to this, Norton was considered to be argumentative and opinionated by the Masons of the Massachusetts jurisdiction, and beyond. He collected some of these articles and new writings in a book called Masonic Fiction Exploded: Including the Pretended Grand Mastership of Henry Price, published in 1896.

Norton did not remove himself from Freemasonry altogether, however, as he continued to attend the meetings of Joppa Lodge in England when his trade took him there and also corresponded with Masons until his death. Additionally, he joined the Correspondence Circle of Quatuor Coronati Lodge in London in November 1887.

In his personal life, Norton was married to Miriam Norton (born 1829), and had three children, Edward, Rachel, and George. Sometime between 1852 and his death he renounced his Jewish faith and considered himself an atheist. He lived in Boston until his death in March 1897, aged 83.

The twelve letters available here are part of the over 700 letters in the Jacob Norton Papers collection, which consists of Norton's incoming correspondence from well-known nineteenth century Freemasons, such as Rob Morris and Enoch Terry Carson.

View the items in the Jacob Norton Papers

A letter from William P. Mellen to Jacob Norton, a Jewish Freemason. Dated May 29, 1856. In this letter, Mellen, an ally of Norton and the editor of The Acacia, a Masonic publication, replies to Norton's letter of May 19, 1856. Mellen offers Norton…

A letter from William P. Mellen to Jacob Norton, a Jewish Freemason. Dated November 3, 1855. In this letter, Mellen, an ally of Norton and the editor of The Acacia, a Masonic publication, replies to Norton's letter of October 19, 1855. Mellon…

A letter from William P. Mellen to Jacob Norton, a Jewish Freemason. Dated March 24, 1855. In this letter, Mellen asks Jacob Norton for a copy of Norton's 1852 petition to the Grand Lodge of Massachusetts to change aspects of its rituals. George M.…
View all 12 items